Gaspari Nutrition is widely viewed as the leading brand of nutritional products meeting the specific needs of both professional and amateur athletes and body builders. From muscle building and recovery to mass building and protein mixes, Gaspari Nutrition has developed products to help athletes look and perform better based on combining nutritional science with high quality ingredients. After adding probiotics to its existing protein MyoFusion® and Real Mass® Elite Athlete Weight Gainer Powder product series, Gaspari Nutrition is finding the product appeals to the mass market, not just those who consider themselves athletes.

Rich Gaspari, founder and president of Gaspari Nutrition, had learned about the digestive system and immune health benefits of probiotics and wanted to incorporate them in his products. “Once the benefits of probiotics were brought to my attention, I knew I needed to put them in a great tasting product like MyoFusion and Real Mass,” said Gaspari. “If you’re an athlete or a company owner like me, you always need to stay one step ahead of the competition.” 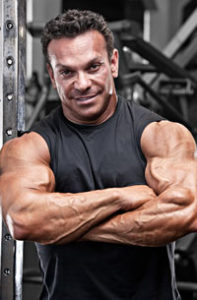 “I was amazed at the research and the number of studies conducted on GanedenBC30.”
- Rich Gaspari, Founder and CEO, Gaspari Nutrition

Gaspari was a professional body builder for more than 20 years and won numerous competitions and titles including Mr. America, Mr. Universe and was three-time runner up Mr. Olympia. According to Gaspari, stability in probiotics was of the utmost importance, as was using the highest quality ingredients. “It was important that we found a solid, stable probiotic that would work,” said Gaspari. “We needed a probiotic that didn’t need to be refrigerated and could withstand heat and shelf life. I was amazed at the research and the number of studies conducted on GanedenBC30—it’s surrounded by a spore and it’s literally protected until it’s digested.”

According to Gaspari, they considered a variety of probiotics before finding GanedenBC30. It was the only probiotic strong enough to meet their stringent needs. The composition of GanedenBC30 differentiates itself from other probiotics with its ability to survive manufacturing processes, shelf life, stomach acids and intestinal bile. This allows GanedenBC30 to be incorporated into a variety of foods ranging from frozen yogurt and baked goods to hot cereals and confections. The strength of GanedenBC30 can be linked to its naturally occurring layer of organic material that protects the genetic core of the bacteria. Other probiotics, such as Lactobacillus and Bifidobacterium, are unable to form this protective layer, making them more vulnerable to manufacturing conditions.

After combining protein performance with the health and wellness benefits of probiotics, Gaspari Nutrition introduced MyoFusion® and Real Mass® Probiotic Series. According to Gaspari, the new Probiotic Series products match performance with great taste and now, the probiotic GanedenBC30. “Athletes need support for recovery and fueling their muscles and that’s just what our new Probiotic Series products do and with great taste too. I was a former athlete/body builder; looking at this product from the consumer’s standpoint – this is what I would have wanted as an athlete. I feel it will benefit athletes even if they don’t realize the benefit. You’ll be able to build more muscle, burn more fat…I recommend probiotics in the diet.”

But according to Gaspari, you don’t have to be an athlete to enjoy the benefits of the MyoFusion® and Real Mass® Probiotic Series. The products are used as an extra meal of the day and now include probiotics, which would have otherwise been consumed as a yogurt or another form of a snack that would have increased one’s sugar and caloric intake.

“My products are designed for anyone that is into fitness and athletic training, not necessarily body sculpting. Working out puts your body through stresses. Probiotics are an add-on benefit to the health system that are good for anyone that works out.”

And as a fitness enthusiast, Gaspari himself has seen benefits as result of GanedenBC30. “I’ve noticed that since using probiotics I feel less bloated. I eat 6-7 meals throughout the day and often times I felt bloated. I don’t feel that anymore since taking probiotics.”

Want to include GanedenBC30 in your food or beverage product? Contact us.