Back in 1999 when Tipton Mills, then Buffalo Blends, opened its doors as a regional contract manufacturer, nobody would have pegged the small company for the innovative leader it’s become today. With its recent launch of the world’s first probiotic coffee, Tipton Mills has made its mark as an originator.

With a new, larger, modern facility, Tipton Mills was well-poised to introduce new products. The company turned to the burgeoning natural health market for inspiration.

According to the National Coffee Association, Americans drink an average of 3.1 cups of coffee a day per person (the average size of a cup is 9 ounces), while the U.S. spends $40 billion on coffee each year.

“I admit that we were very skeptical initially about a probiotic working in a hot beverage but GanedenBC30® (Bacillus coagulans GBI-30, 6086) demonstrated through rigorous testing, that it could work at a level that was beneficial. So once we were convinced of that it was an easy decision,” Sheehy says. 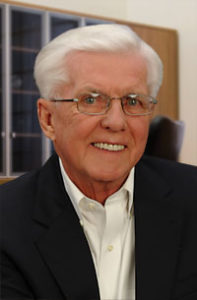 “GanedenBC30 was a vital component in the successful development and scientific process of creating the product.”
- Tim Sheehy, President, Tipton Mills

The process for the probiotic coffee from idea to product wasn’t as lengthy as you might expect. “It took about 9 months,” according to Sheehy. “I would be remiss not to mention that the GanedenBC30 team was a vital component in the successful development and scientific process of creating the product. Their science team, everyone there, was always available and reached out to help whenever we needed them.”

GanedenBC30 is unique. Inside each cell is a hardened structure, or spore, which is similar to a seed. This spore serves as a natural protective shield against the heat and pressure of manufacturing, product preparation and the strong acids in the stomach allowing it to arrive alive and then thrive in your intestines—the intended target. 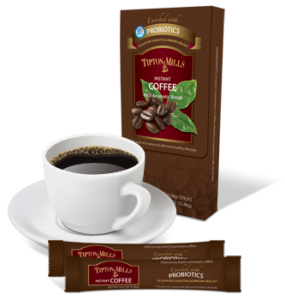 Sheehy is delighted with the finished product. “We have a product that’s unique to the consumer; it adds real value, not perceived value, it’s not just another coffee. We are providing a specific benefit to consumers wanting to lead healthier lifestyles.”

With an industry award in hand and products on store shelves, Sheehy is excited about the future for its probiotic coffee, and beyond. “We’ve learned that a key to the products success is education. Consumers often have questions about a probiotic surviving in a hot environment so we do a lot of demos and include a pamphlet in products explaining the process.”

Want to include GanedenBC30 in your food or beverage product? Contact us.